Letters from the Big Man 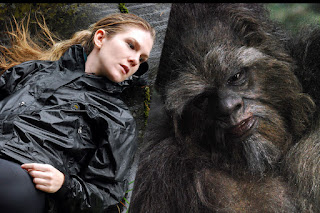 Against the backdrop of a controversial fire salvage in the Oregon wilderness, an artist-forester unwittingly finds herself interacting with a mythic creature who changes her life profoundly.

​“A remarkable film. . . . [t]he gradually spiralling construction is the heart of the film, and it’s ingenious; the narrative result—an opening-out onto a moment of a potentially historic import—is up to the audacity of Munch’s ambition.”  Richard Brody, The New Yorker

“‘Letters From the Big Man’ Presents an Evolved Sasquatch Rendered with Earnestness and Filmmaking Skill.  The Bottom Line:  Original and affecting take on the sasquatch legend. . . . This is clearly not a film made for everyone, but for a fortunate few, it will feel like a cleansing in nature. . . . The exquisite natural light captured by cinematographer Rob Sweeney and a sweeping score by the chamber group Ensemble Galilei helps make the magic seem plausible. But it’s Rabe who you really can’t take your eyes off of.”  James Greenberg, The Hollywood Reporter
​
“Among other must-sees: Chris Munch’s Letters from the Big Man, a fairy tale for adults about a young woman who encounters a bigfoot in the deep forests of southwestern Oregon and forms a mutually protective relationship with him (I believed every minute of it).”  Amy Taubin, Artforum

“Letters from the Big Man will mystify some, please others with its serenity, and be unlike any Bigfoot movie you have ever imagined.”  Roger Ebert, Chicago Sun-Times

​“Graceful, uncynical and transporting, Letters is an original and a beauty.”  Ray Pride, New City-Chicago
​
“Letters from the Big Man sustains its deeply felt love of nature’s mystery – and majesty.”  Melissa ​Anderson, Artforum
​
“[P]leasurably eccentric. . . . the kind of off-Hollywood production that still makes Sundance surprising.”  Manohla Dargis, New York Times (Sundance Roundup)
​
“​Rest assured that Big Man is open-ended and gently playful throughout. . . . Its quiet plea for reconnection with the non-human world is persuasive, and the engaged, agile meditation on the limits of communication at its center aligns it with Munch's earlier work. Oregon's million-dollar scenery, a sweet cameo by Karen Black, and Rabe's tough/tender performance sweeten the pot. . . . Its inspired alignment of personal and ecological loss will disrupt someone's serenity at least a little.”  Mark Holcomb, Village Voice
​
“This oddball take on a naturalist (Lily Rabe) surveying the local woods and the sasquatch who silently surveys her shows Munch returning to form in a big way; its deadpan take on mythic creatures and the messy business of love harkens back to the days before outside-the-studio moviemaking became the province of pop-culture referencing hit men and twee twentysomethings. See it.”  David Fear, Time Out New York
​
“[E]motionally involving. . . . Big Man mashes a few genre moves (the title refers to a soulful sasquatch) against complex political concerns (forest conservation and logging) to cross-pollinate a field in which some new form of emo-indie intimacy can take root. . . . Christopher Munch’s hybrid winds up feeling like an authentic discovery of indie territory left unexplored since John Sayles’s 1984 Brother From Another Planet.”  Seth Colter Walls, Village Voice
​
“I can't imagine a moviemaker other than Munch bringing so much conviction to such a wigged-out premise. Letters isn’t a spoof, a horror movie or a new-age metaphor. . . . It’s closer to a fairy tale that retains its hold on the adult imagination, even though one might feel silly admitting it... Shot with the RED–a great camera with which to capture the deep green of the forest by day and by night–Letters reverences the natural world, finding in its beauty and order a way to fulfill one’s life.”  Amy Taubin, Film Comment
​
“Shot in the sprawling forests of southern Oregon, Letters From The Big Man has the novelty value to achieve profile in today’s marketplace and could easily tap into a grass-roots appetite for well-told environmentally conscious stories. . . . Munch explores both the scenery and the character’s calm within it with sometimes mesmerising grace.”  Mike Goodridge, Screen International
​
“Director-writer Christopher Munch just wants to tell a light-handed, low-key story about several people who like the woods, while he photographs those woods lovingly enough to make us fall for them as well. There happens to be a sasquatch in the background, but he never channels King Kong.”    The Province-Vancouver
​
“[A] powerful meditation on the environment without the heavy handedness of a Greenpeace ad.”  Brooklyn Based
​
“Another under-appreciated Sundance selection, Christopher Munch’s contemplative tale about a wildlife researcher (Lily Rabe) studying forest fire damage in Southern Oregon takes on a surreal twist when the character forms a mystical bond with a furry Sasquatch tracking her every move. More metaphor than man, the creature symbolizes the love affair that all creatures share with the nature surrounding them. With the creature’s livelihood threatened by invasive government agents, Munch heightens the fragility of that relationship. An unwillingness to take the movie seriously, as impatient viewers might, only strengthens its keen ecological message.”  Eric Kohn, IndieWire
​
“Christopher Munch’s latest feature explores the odd, mystical connection between a relationship-phobic wilderness expert (the excellent Lily Rabe) and an earnest sasquatch (featuring first-rate makeup effects). There is an environmental theme afloat in this beautifully shot film, but Munch isn't in the mood to big-foot us with a message.”  David Lewis, San Francisco Chronicle
​
“Lily Rabe manages to command our attention in scene after scene without dialogue.  Munch just has her work, exercise, and paint while we (and the sasquatch) develop a silent bond with Sarah.”  Brian Miller, Seattle Weekly
​
“[A] willfully naive poetic reverie about lost souls trying to get close to nature in the Pacific Northwest and about the giant man-beasts who watch over them – and, by extension, us – like hairy angels. The star is Lily Rabe (daughter of the late Jill Clayburgh and playwright David Rabe); she plays an Amazonian US Forestry Dept. surveyor who finds her deepest peace camping out in the backcountry. Munch’s film touches on many things, including the logging/ preservation debate (the director finds room for the people on both sides), idealism, young lust, CIA advanced-weaponry programs, and Native American animism.”  Ty Burr, Boston Globe
​
“[A] strange dance of love with a sasquatch, handled with just the right touch. . . . Well played by the entire cast, beautifully shot, and, although a mite goofy, delicate, haunting and sweet.”  Shawn Levy, The Oregonian
Newer Post Older Post Home