Color of a Brisk and Leaping Day 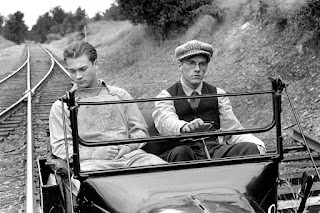 Eighty years after Chinese laborers built the railroads that forged a new America, one of their descendants fights to save the short-line train through Yosemite Valley.

“Whereas the great Hollywood westerns were nostalgic for a time and place that didn't exist, Color of a Brisk and Leaping Day is nostalgic for a time and a place that did – but that is no less elusive. . . . [A] metaphysical meditation on the past – and memory – as a repository of ideals, including romantic love, that exist only to haunt us with their ungraspable perfection, with what once might have been but can never be. . . . [T]he movie has the aura, too, of a '40s picture postcard – the kind you can find on any market stall or in any thrift shop – sent and received by people long dead.  Ultimately, though, Münch's film isn't an elegy, but an exploration of the elegiac mode and the dreams we lose as each of us, in our own way, heads West.”  Graham Fuller, Interview Magazine

“Münch has taken a kernel of a true story and made of it a richly contemplative work.  It is a celebration of cinema and of railroads, which when joined, have a unique and romantic capacity for transporting us to a different time and place.  In turn, we experience the juxtaposition of nature and technology as images of Yosemite reminiscent of those of Ansel Adams are interwoven with the machine age glories of an old fashioned working train. . . . Against this setting and situation Münch creates an exceedingly subtle portrait of a young man, as exceptional in his way of thinking as in his good looks, who in trying to save the Y.V., has embarked upon a journey of self-discovery, a quest for identity. . . . ‘Color of a Brisk and Leaping Day’ is charged with eroticism and suffused with feelings of longing. . . . [I]n its wedding of dreams and technology, [it] is a  beguiling, unique reverie.”  Kevin Thomas, Los Angeles Times

“The Sundance Film Festival’s one brush with the sublime this year. . . . It’s filmed in breathtaking immaculate period-style black and white, incorporating stunning Ansel Adams-esque landscapes and seamlessly interwoven stock footage from the era (Rob Sweeney instantly jumps to the front ranks of new cinematographers).  The railroad represents not just a link to a vanished past – the protagonist's grandfather helped build it – but all ways of life facing extinction (hence the hero's oblique romantic liaison with a Native American park ranger). . . . Munch orchestrates his dreamer hero’s introspective equilibrium and the film’s tranquil narrative suspension to yield a kind of dazed, displaced eroticism reminiscent of the films of Marguerite Duras.  In its refined sensibility, uncompromising visual purity, and elegiac lyricism Munch’s film is at once sui generis and kin to both Terrence Malick’s Days of Heaven and Wong Kar-wai's Days of Being Wild.  Gavin Smith, Film Comment

“Messier and more enigmatic, Christopher Munch’s Color of a Brisk and Leaping Day is nevertheless a film touched with greatness.  Its fetishizing of an irretrievable past, its haunting sense of place, and even the catatonia that affects its actors are worthy of comparison to Vertigo.  Hardly the perfect object that Munch’s earlier The Hours and Times was, its relation to history is more complicated and ambitious.  At the very least, it’s a transitional work by an exceptional filmmaker. . . . [I]t examines a moment in American history from the point of view of an outsider by birth who’s also out of step with his times.”  Amy Taubin, Village Voice

“[B]oldly atmospheric and mystically beautiful. . . .  Echoing the stately pace of the sound track, the dialogue is delivered with a rhythm that intensifies the drama even as it draws attention to the artifice of acting. Munch’s self-conscious blend of documentary and fiction conventions reveals both the limitations and possibilities of received ideas about storytelling, as this movie gives many levels of meaning to the apparently contradictory notions of preservation and progress at the heart of Lee's – and the filmmaker's – restoration project.  Lisa Alspector, Chicago Reader (Critic's Choice)

“[A]ll the real concerns are kept suppressed and discreet, occasionally betraying themselves in a gesture or a reaction. . . . Münch presents Lee’s story in a flat, nearly documentary style.  There is little background music beyond some quiet Erik Satie piano pieces, and the camera remains relatively static within shots.  The effect is of a docudrama or home movie, albeit a beautifully lit one.  There are no grand dramatic moments, no carefully wrought speeches, no comic relief.  The performances are so unaffected, the film so stripped of obvious artifice, that we feel as if we are eavesdropping on real people. . . . The movie is full of hints, devoid of explanations.  Like the characters, it is utterly repressed.  But the dissonance between the unembellished style and the intrusion of these troubling, outrageous implications is fascinating.  Color of a Brisk and Leaping Day plays like V.C. Andrews, filtered through the rigorous style of Robert Bresson.”  Andy Klein, New Times (Los Angeles)

“[D]reamy, intense and finally elusive. . . . Whether capturing the natural beauty of clouds and wilderness or the grand old trains that summon a vivid American past, the film’s look is extraordinarily eloquent and pure.”  Janet Maslin, New York Times

“This (true) story, which evokes Coppola’s Tucker, is directed with the usual subtlety of Munch, who enchants the spectator with his atmosphere and by a series of barely visible signs in the composition of the image: a sudden look, the beginning of a gesture, a laconic phrase.”   Bérénice Reynaud, Cahiers du Cinema (from the original French)

“For those who have ever offered up their hearts on a platter with no prospect of getting it back, this movie will be their benediction.”  Ella Taylor, L.A. Weekly


“At first glance, ‘Color of a Brisk and Leaping Day’ seems a simple tale of a confused young man who sets out to save something he loves.  But in the hands of director Christopher Munch, the understated simplicity is intertwined with a breathtaking beauty that is meditative and thrilling. . . . In the end, ‘Color of a Brisk and Leaping Day’ is not a tale of one man's success but rather his ability to fail and move on.  With a refined sensibility, Munch has created a striking visual tale that focuses with fine nuance on the building blocks of racial identity, family, love and responsibility.  It is also an epic poem to trains and a sadly beautiful moment in American history that is forever gone.”  Mary Houlihan-Skilton, Chicago Sun-Times